Topics may eventually be moved to other Delica Canada forums.

While having a very slow day fishing this past week I had an idea that I think may have some merit. Most Delica owners expound on all the camping and back road driving they intend to do once they have it 'set up' for camping. If this is the case we should have a vast knowledge of many of the recreation sites and I for one would like to know more about some of them before I go. ( Thanks Wayne for the info on Taurus site last year ). BC has over 1100 official recreation sites and few hundred more unofficial sites that they abandoned when they were taken over from Forestry. Their web site http://www.campingrvbc.com includes all these sites, many with pictures, but that only tells part of the story.

I suggest we start a little 'contest' for lack of a better word simply called “Locate the Recreation Site”. I think the purpose of the selection is to show a site that others would enjoy. It may be great fishing, hiking, biking or just a great drive to the site. Since I thought up the idea this is how I suggest it works.

1.A picture of the location will be posted ( hopefully including your Delica) c/w the WMU number to give everyone a clue. The picture should be taken in a fashion that anyone who has been to the site would be sure to know which site it is.
2.The first person to correctly guess the site gets to post the next site.
3.If no one guesses the site by the following Monday the person who posted the site adds one clue a day until we have a 'winner'.
4.If no one guesses the site by the second Monday the poster advises the site name and also posts a new site.

With the number of sites we have to work with we could be at this for over 20 years at one site per week!! Hopefully this will add a little life to the forum now that Green1, and Steven rarely if ever visit the site and Mardy and psilosin seemed to have come to a truce.

I guess that was just to easy. I thought it would last at least a day. Your turn!!

Great idea Larry. I'm tied up for the next few weeks but maybe Laurent or Christine (tardisdeli )can jump in with a camping pic. Laurent told me he had been camping lately.

Nice pic of Driftwood Bay, I'll have to visit that spot. Is that an piece of ice floating in the lake? Brrr.

I didn't take any pics of my latest fishing trip to Peterhope Lake in May. I was too busy catching fish.

Triumph73 are you going to add a photo of a Rec site as per your privilege for guessing Driftwood Bay?

If you don't have any let us know and I'll add another - definitely harder than Driftwood Bay. There was no ice on the lake Wayne as people (even adults) were in the water.
Top
lrp374

Since Triumph 73 has not selected a new Site I will add one that will be a little harder for some to determine. This site is in WMU 3-27. Extra clues will start on Thursday if no one has guessed it by then.

Below is the general area of WMU 3-27 that includes the Rec Site. New clue tomorrow if no one gets it -- but someone should get it with this clue!

Larry
Your clue helped a lot. I fished Hefley, Community and Badger Lakes many years ago and although I couldn't recognize the picture I'd guesss at Hefley Lake. Just cuz access is easiest.

Well I'll give you that one as you did have it listed in your group. I was there yesterday and fishing was not so good. Of course people told me how good it was the day before!! Can't wait to see what's next.
Larry

Larry
The day we fished Badger it blew so hard and the fish were at 40 ft. needless to say we caught nada but that's fishing, not always catching but it's fun.

I'll be at Wood Lake for a week at month end, too bad there's a ban on catching kokanee. I may go to Eastmere or ??
TLGF
loving 3 delicas and 12 years of RH driving
Top
thelazygreenfox

Well Wayne tomorrow ( Friday ) has past. You have until 5:00 today or you loose your turn and I'll have to post another Site.

lrp374 wrote:Well Wayne tomorrow ( Friday ) has past. You have until 5:00 today or you loose your turn and I'll have to post another Site.

Fun game Larry, can't wait for my chance to play. Now that I've clued in to the WMU I stand a chance of guessing a site now. Couldn't name Badger Lake but recognized it, it's been 10 years since I've fished that area - and 2 weeks till I spend a couple weeks in the Hwy 24 area. 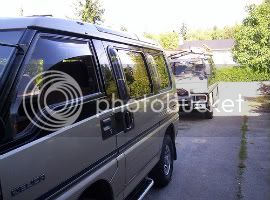 The new site for this week or less is in WMU 5-4 which is west of Williams Lake. I have many sources for the WMU ( Wildlife Management Unit ) locations so I presumed everyone else did as well. They show on all the Backroad mapbooks, fishing synopsis and several locations on the internet. Hopefully everyone can find a source. I'm heading up Hwy. 24 tomorrow Kevin for a few days. Hopefully the weather holds out and the fish are active. I'm sure you'll find a few as well when it's your turn.

Sorry for the bump Wayne but the search must go on, we still have nearly 1000 to check out!!

Spent the summer just before moving overseas touring southern BC with my son, many thousands of WVO km's, including Hwy 20 twice as I was born in Bella Coola. And my family is all of norwegian descent from the valley. My guess is Choelquiot lake (edit; but it looks over on the same peak I'm certain), but don't think it's correct, it's just the furthest I've been in that area since my youth. Memory tells me that lake pictured is larger.

Are you camping up hwy 24 way Larry?